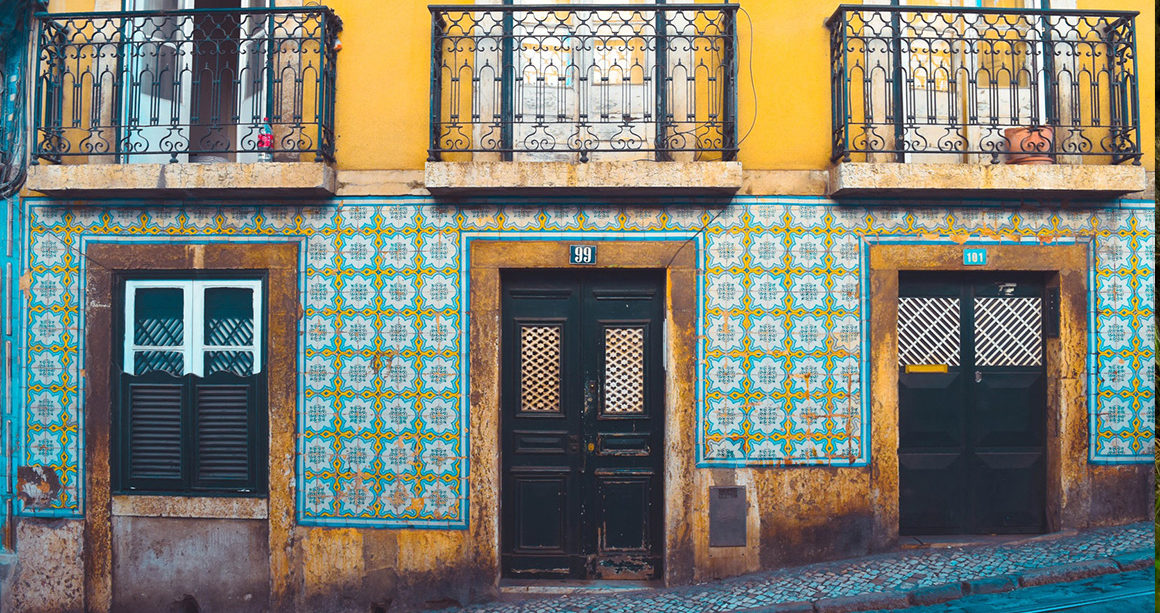 While elements of Portuguese architecture go back to the days before the founding of Portugal in the 12th century, they continue to resonate today not only in Portugal, but in other parts of the world as well.

The “Portuguese” style is however far from static and has changed innumerable times within history, with each ethnic group that lived in the Portuguese Empire implementing some of their own cultural and aesthtic adapataion across the different structures that were built – including ports, castles, shops, houses, squares, among others.

As European architecture passed from the romantic to the contemporary style, certain elements remain “typically Portuguese”.  Here’s a look at some of them:

Tiles
Portuguese tiles, or “azulejos”, carry Moorish influence and are usually less thick and lighter then other tiles, with ceramic, glittering and impermeable features. Initially, they were very colorful. Then, with later Dutch influence, the monochromatic blue came to dominate. They are currently used not only for their aesthtic value, but also because they are easy to maintain and offer impermeable protection to outer facades.

Cobblestone
Portuguese cobblestone, or “calçadas”, is another common feature of Portuguese architecture. It represents floor covering used for paving of sidewalks, and sometimes used indoor with epoxy varnish. These traditional Portuguese sidewalks are made of small irregular stone blocks, often in black and white tones creating mosaics and designs on the floor. Due to the abundance of raw material in the region, the most used colors are black, white and brown. This kind of pavement continues to gain worldwide popularity and is considered a form of artwork in the pedestrian zones of the cities. The sidewalks are also functional and often made up of easy to sourced raw materials.

Frames
Cantarias” (another Arabic word) are very visible in Portuguese architecture. In the past, these were made of stones of the region and involved detailed work of craftsmanship. Particularly in the south of the country, more precisely in the Algarve region and in Andalusia, residential, commercial and small farm architecture continue to rely on cantarias inspired by the architectural legacy left by the Moors.

Plantibanda/Parapet wall
The architectural term “platibanda” is used to describe the upper decorative band. This traditional element of the Algarvian architecture is of decorative character and “crowns” the facade, hiding the roofs behind it. The lavish use of this decorative element symbolized the financial power of its property owner, a symbol for wealth that would often be used in multiple colours.

Chimneys
The distinctive Portuguese chimneys are visible for anyone who has visited Algarve in particular. In the old days, chimneys symbolized the personality and wealth of the owner of the house. All chimneys were distinct from each other, with the more detailed and expansive ones carrying the highest status symbol.

Terraces
Known as “açoteias”, terraces carry Moorish influence as well and in the past served to observe the sea and the boats that arrived. Currently, many residents use this space to dry fruit and fish as well as a space to rest during hot summer evenings.

Materials
Stone, clay, lime and wood were the elements that appeared the most in the construction of historic traditional Portuguse architecture and this materials continue to be popular. Lime, mainly, was one of the predominant material as it was easy to find in the region and continues to form the base for beautiful white facades.

While Portuguese architecture today is associated with famous Portuguese architects and their work around the world, anyone can get inspired by these elements to create a unique space with Portuguese charm. Tiles, side walks, bright colors and stone material can add a trendy, traditional character to any home.

Do you have more ideas or pictures to share on how to create a Portuguese-inspired home?
Let us know how.